Want to Step Up the Power and Sparkle in your Singing?

Get your FREE guide to the most essential tool for powerful singing!

Rest assured your information is safe with me. In order to comply with the new GDPR, I must tell you that your details will be saved confidentially by myself, Selena Mara, in order to send you your free guide and to communicate with you about your voice and singing. By Selena, 25/10/2021, Category:Singing with freedom and creativity, Unlock your vocal potential

It's rife with controversy and confusion. Explanations of what they are and how to control them vary wildly. I know because I've searched widely across the internet and read a large number of singing textbooks. Many descriptions contradict each other, are extremely vague, nonsensical, or just plain inaccurate.

I've recently done some training with Janet Chapman, Andy Follin and James Platt of Classical Voice Training, and they are working at the cutting edge of research into vocal registers. Until recently, there has been a lack of proper scientific information and evidence to actually show us what's going on. But now there is, so we can clear up the confusion, and go forward with clarity.

Information is power. And so this means we can also DO the right things.

So what exactly are vocal registers? Well, first and foremost, they're a function of the vocal folds.

The vocal folds create the pitch of your voice. There are two flaps of tissues stretched across your larynx or voice box, and they open and close (vibrate) hundreds of times per second to produce sound. 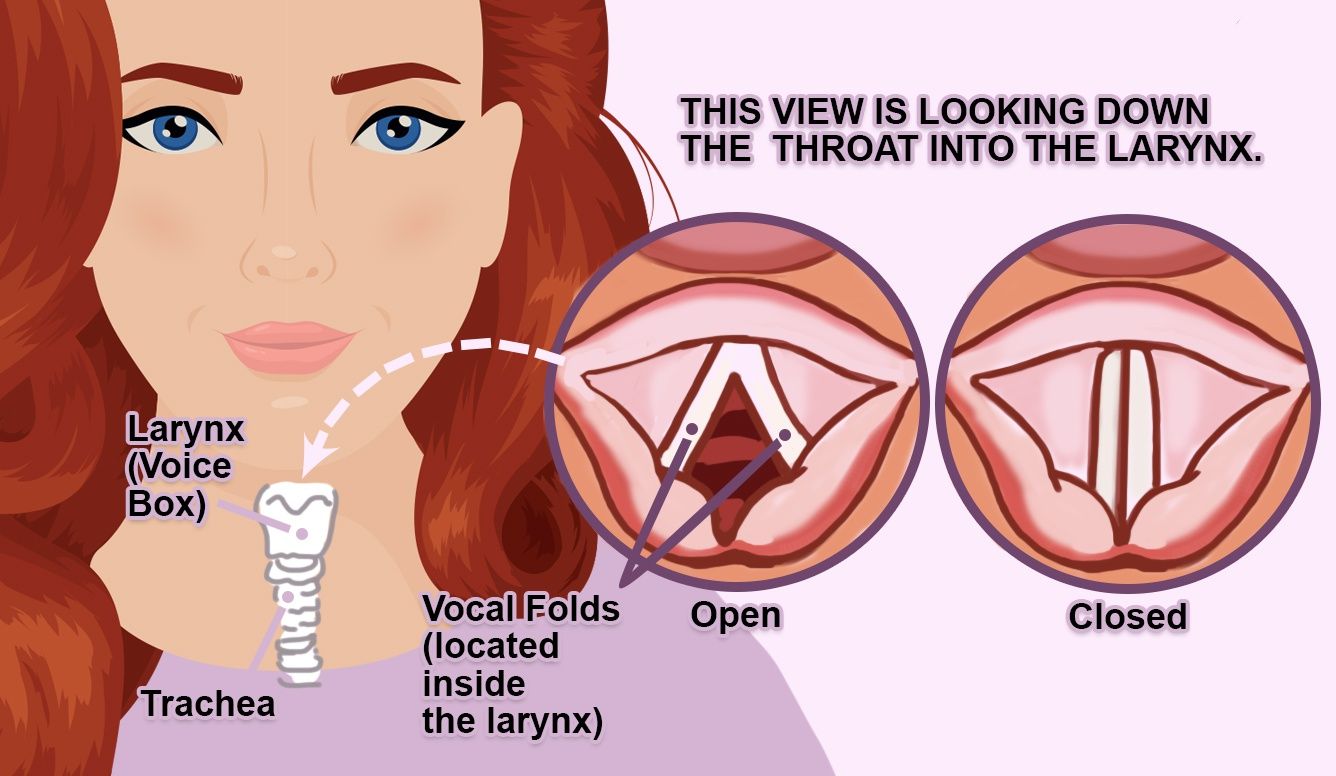 Registers, act like the gears of the voice.
To enable you to sing different pitch ranges across your voice - from very low, low to middle, middle to high and extremely high..... your vocal cords need to vibrate in a different way, in a different configuration. Think of the fatter and thinner strings on a guitar.

Would you agree that you think of them like that?

Now head voice and chest voice are useful labels to describe an overall quality of register as I've just explained. But they are NOT good scientific descriptions, because they don't indicate the actual anatomical function or action that determines register.

We'll get to what that is in a minute. It's true that when you sing in head voice, or higher pitches, you can often feel a slight vibration in the top front and top of your skull. And when you sing in chest voice or lower pitches, you can often feel a vibration in your chest. But let's be clear, these vibrations are an effect of, or a bodily response to pitch levels (lower and higher). They are not the CAUSE or ORIGIN of register.

So what DOES determine or cause register changes? I'll come to that in a moment.

But right now I just wanted to point out that most women have their break between head voice and chest voice somewhere in the middle of their voices, usually between E4 and A4. So they do really need to be able to produce both chest voice and head voice well, and to smooth their register break, in order to sing a wide variety of songs.
Whereas men sing predominantly in chest voice. In fact male head voice is actually falsetto. So for the majority of men it's less important to manage the break, because that pitch range, (usually B3 to E4) is not so present in most of the songs that men sing.

Okay, so what does determine or cause register changes?

Well, recent scientific research shows us that there are in fact, only four registers.
To avoid confusion with all the different inaccurate terms that I mentioned earlier, these are labelled M0, M1, M2 and M3. We can see that the vocal folds vibrate in a distinct way for each of these four registers. This amazing image below shows the vibration of the vocal cords over time. 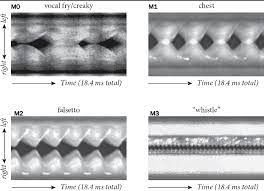 As you can see, there's a difference in these registers / mechanisms between:
A) the regularity of vibration;

B) the thickness of the vocal folds contact with each other;

C) the frequency of vibration or speed; and

D) How much connection they make.

So,
M0 corresponds to what's commonly known as vocal fry or creak. The vocal folds vibrate with low speed and low pitch. They have a lot of contact, and they meet irregularly.

M1 corresponds to what we generally call chest voice. The vocal folds vibrate with fairly low frequency or speed, but faster than M0. They have a fairly meaty or thick contact, and they touch regularly.

M2 corresponds to what we normally think of as head voice. The vocal folds are vibrating faster, regularly, and they meet with thinner edges.

M3 corresponds to what is known as whistle voice. This is extremely high pitched. It's super fast, thin, the vocal cords meet regularly and contact is barely made.

Below, is an audio demonstration of each of these registers. I demonstrate vocal fry, chest and head voice.

So how do we achieve these distinct registers, how are they generated?

Well, there's a lot to it. but one thing we can say for sure. It's a lot to do with how the vocal cords vibrate.

Have a look at this diagram, this shows the vocal folds from the side in cross section. They're made of five layers of different kinds of tissue, but they function as two layers, the body and the cover. The top three layers together are known as the cover, and the inner two layers are together known as the body.

Different parts of the vocal folds can vibrate separately or together, and this forms a major part of what distinguishes and creates vocal registers.

In M0, both the body and cover are loose.

In M1, both the body and cover are vibrating.

In M2 only the cover vibrates.

In M3, only the very inner edges of the vocal folds are vibrating, that's the cover, they're very thin and stretched and they don't close completely.

So what is the main problem with vocal registers?

Well, as you probably know, the issue for singers is changing between registers smoothly, and not having an ugly or break or crack in the voice. But the thing, is you can't have a halfway house in between head voice and chest voice.
Either the body and cover are vibrating, or only the cover is vibrating. It's one or the other, so it's natural to have a break in the voice.

There is no such thing as mixed voice or middle voice. However, as singers, we often want to eliminate that glitch or break as we move from one gear to another, or from low pitches to high pitches. But what we CAN learn to do is to DISGUISE it.

So how do we disguise the change of gear in order to hear a smooth sound as we move through our range? We can hide the break by manipulating other aspects of the voice, ones which do exist on a continuous spectrum, a gradation.

So we adjust resonance, dynamics, (volume) and phonation quality. Now HOW we do that is not the subject of this article, but it is a skill that can be learned. And it's easier than you think.

Sorry if those terms sound jargon-y to you. They may sound technical, but they are all just tools you can learn, and which you probably already have some control of.

> Registers are a poorly understood and badly taught aspect of singing.

> Registers are an important element of how the voice works and how we control our voice to achieve different pitches and qualities.

> New scientific research shows us the truth about registers. There are four of them. We sing predominantly in M1 and M2 which pretty much correspond to chest voice and head voice.
> We can learn to smooth out, or in reality disguise the register break in order to get a smoother and more consistent quality across our range.

If you want to gain control of your chest voice and head voice, smooth your register break with ease and avoid that ugly break, you're in the right place.

I offer a 4- week one to one training and coaching course for individuals to enable you to achieve this. It's called Smooth Your Register Breaks. Find out more about it HERE.

Get your Number 1 Essential Tool for Powerful Singing